Everything you need to make a house a home

Another brick for the wall – part two

The Before – ugly old rotten wall

A few posts back I showed off my brick samples and excitement about having a new garden wall built. As someone who has wanted to build my own house from birth (or at least toddlerhood) I see this as a baby step to building bigger walls and ultimately my own house.

In the end we went with the brick sample that was the closest match to the house brick with a brownish mortar to match the house. After months of walking the dog past various brick walls in the neighbourhood and noting how many courses (rows) of bricks high they were, what type of pillar we liked best and how many we wanted (one at the entrance to the drive? One at each end of the wall? One in the middle too (or would that we too busy?) we came up with the ultimate design 6 rows high with a 7th row of bricks on their side to finish the top of the wall. Two pillars one at each end with an elegant pier cap.

In order to keep costs down we decide no iron railings between the pillars (we can always go posher later), and no concrete or stone caps on top of the wall (ideally I would have loved reclaimed curved caps on the wall like it would have had originally, but from a reclamation yard these are £12 each and we needed 18 – yikes! We also ruled out reclaimed brick to keep costs down.

The After – now that’s a foxy wall!

Neighbour on the left – the brick was too orange and they went with a black brick that was way too modern for me, I wanted to match the house and not stray too far from what the original wall would have looked like. I also definitely wanted a pier cap (so much new vocabularly) this is the square of concrete or stone that sits on top of the pillar) to finish things off – so matching neighbour on the left in terms of the look was out. What we did decide to do was match left neighbour in terms of the scale of their wall so our wall is more or less the same height and more importantly the pillar is the same size as theirs so when you pull in the drive they are the same size on either side which gives a feeling of matching in size if not in style.

Neighbour on the right has the original wall which is in good shape, but needs a little work, it is also very dark brick (probably from age) which weirdly doesn’t match our house so much and they have the original pointed caps. Since we couldn’t match their wall we decided to go with a pillar at this end to differentiate between the two wall styles because if you can’t match something I recommend heading the other direction and go with a bit of contrast. Spooky without even trying our wall is the same height as the neighbour on the right even though we didn’t plan it that way so it matches even though it doesn’t which I love. 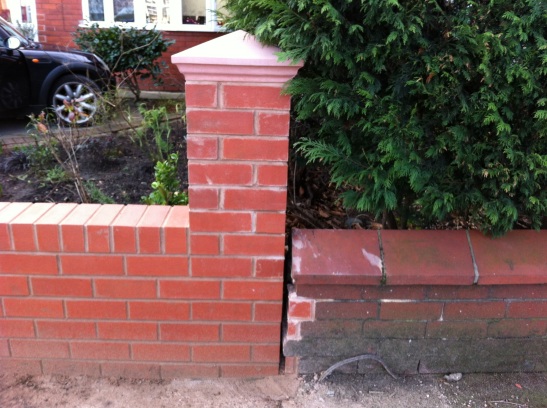 Our brickie also matched the new wall with the existing picket fence which bisects our wall in such a super tidy way it looks new too!

As with any successful DIY project I just wish we had done it sooner!

Top tip pier caps make all the difference, but cost a fortune and are weirdly hard to find beyond the basic styles I totally recommend Westfield Art Stone where we bought ours. They manufacture all their styles in pink, pale biscuit and grey. Also, if anyone needs a brickie in Manchester I totally recommend Mather Brickwork. 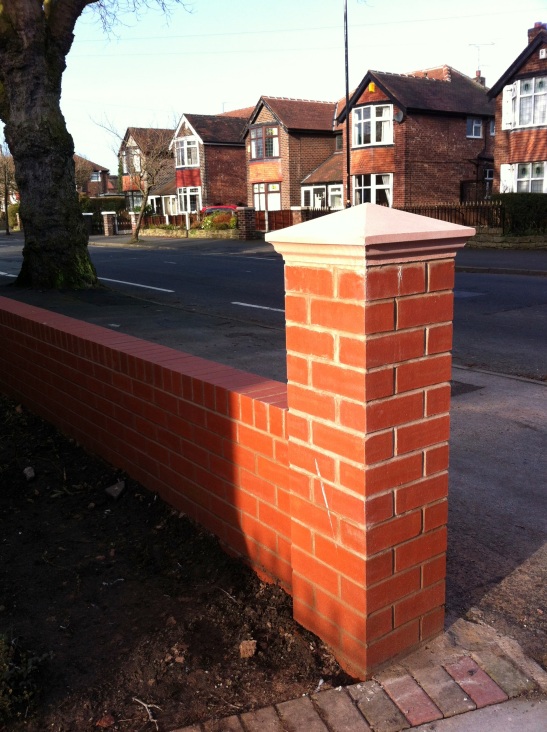 This entry was posted on March 2, 2014 by The Sourcerist in Projects, Uncategorized and tagged brick, pier cap, wall.